In class we focused mostly on the finch poems and the whole idea of the bird in the cage for women. Women have been likened to songbirds, and caged birds constantly throughout literary history, and it’s not stopped. In Sweeney Todd: The Demon Barber of Fleet Street, there is an entire song for Joanna called Green Finch and Linnet Bird.

In it, Joanna is sitting in her own cage, her room, singing while an actual caged bird is there singing as well just in case the audience didn’t get the parallel.The whole song, which is unlike in style to the others, just hammers home the fact that Joanna is a little singing songbird who needs someone to free her. Interestingly though, once she is free, she is not innocent and foolish. Anthony rescues her and she asks him “so we run away and all our dreams come true?” and when he answers that he hopes so she assures him nightmares never go away. She knows more about the world from her time in a cage than the idealistic Anthony.

Another caged bird is Elizabeth Comstock from the game Bioshock Infinate. Like Joanna this metaphor is blatantly obvious and repeated. You meet the Lutece twins, omniscient people who live between the boundaries of space time (weird I know) and one of the choices they have you make is what broach to pick for Elizabeth’s  neck ribbon, the bird or the cage. 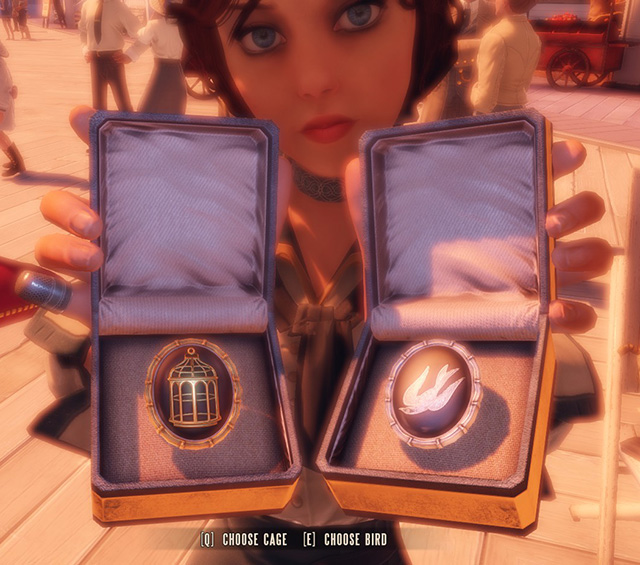 She is even called a songbird in game. Her father, the leader of the people of Columbia (where the came takes place also a floating city in the sky) locks her away for fear that “The False Shepherd,” your character Booker, will corrupt her and stop her from her purpose of destroying the world below by drowning it in fire. Her cage is a giant statue of an angel, but on the inside it has the shape of a cage. You even find a model of it eventually, pictured below. 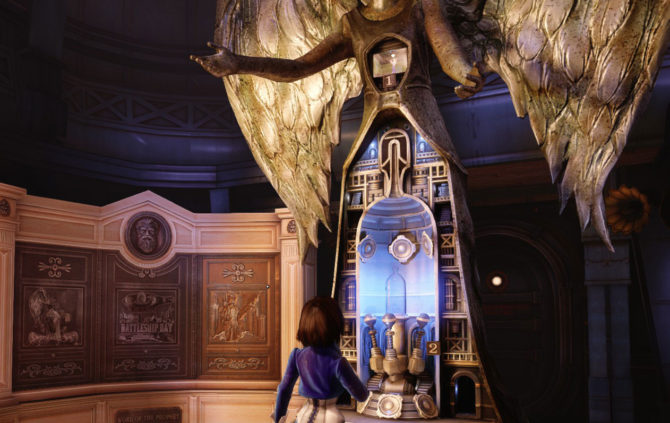 Like in the poems, the captor is her parent and repeatedly asks her to come back, to be protected assuring her that he wants what is best for her. After escaping, being beaten up and even killing someone, Elizabeth is horrified with herself at the moment but she still prefers it to going back. She even makes Booker promise to kill her to prevent them from taking her.

The question of is it better to be safe and imprisoned or unhappy and free was also brought up in class, and these two more modern examples show that most prefer unhappy freedom than to live life safely locked away. The bird and the cage are still common themes in our narratives, but instead of the unsure argument the finch poems seemed to have, where some supported protecting the birds in cages and others advocated letting them go, the more contemporary narratives seem to all agree that freedom is better even if one the person is unhappy.